The Best Loot Crate Review of 2021

Wondering if this geeky subscription box is worth it? Our Loot Crate review covers everything you need to know about this subscription service, and more!

From saving opportunities you can benefit from before ordering your own to comparisons with other, similar subscription boxes – we have covered it all!

Loot Crate is a subscription box that sends out collectibles and gear each month for pop culture fans, geeks, and gamers. They have a large selection of crates in different categories. I’ve never subscribed to this type of box before, but I’m excited to try it out! This Loot Crate review will detail my experience with the website, ordering my first crate, finding coupons, looking through various reviews, and anything else I thought would be important to share.

I always look up reviews and previous boxes before I subscribe to any new ones to make sure it’s something I’d be interested in. That being said, I was a bit hesitant to subscribe to this box because of some Loot Crate complaints and negative reviews that I found. However, I saw positive reviews as well, and some even said that it’s one of the best boxes they’ve received. Obviously, everyone has their own opinions, so I figured it wouldn’t hurt to try it out and let everyone know what I think about it. While I wouldn’t say that I’m a huge pop culture fan, I do enjoy a bunch of movies and video games.

When looking for a Loot Crate review, Reddit was one of my go-to places because there’s always honest reviews from members of the community. A common negative review I found was that the box they ordered took a very long time to arrive or never arrived at all. I’ve also noticed people saying they don’t have very good customer service when incidents like this occur.

The Loot Crate website offers a lot of information and is pretty easy to navigate. They provide all the needed information about their monthly subscription boxes and what you should expect to receive in each box. I also found that they have a page dedicated to monthly contests and giveaways, which I thought was exciting. They have an online store called the “Loot Vault” where they sell products from past boxes and other collectible items. 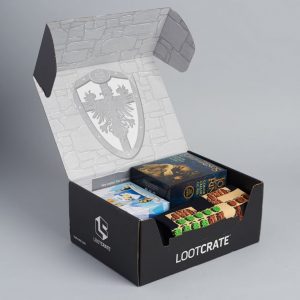 Loot Crate has a large variety of boxes you can choose from. I was able to count 23 different crates on their website, which is far more compared to other subscription box companies that I’ve seen. They have various pop culture crates, gaming crates, film and TV crates, and apparel crates. The more popular crates offer monthly subscriptions, and some of the other crates are sent out every couple of months.

From what I saw in many Loot Crate reviews, a few of the famous crates include the original Loot Crate for $19.99, the Harry Potter Wizarding World box for $39.99, the Loot Gaming box for $28.95, and different kinds of Loot Wear boxes ranging from $9.99-$19.99 per month. Since these are all different prices, they’ll obviously come with different values of products. You can save a little more each month by subscribing to longer term subscriptions, such as three-month, six-month, and yearly. They also offer an upgraded box of their original Loot Crate called Loot Crate DX. This box costs $49.99 and contains $75+ value of products. It advertises 3-5 items. After looking through a Loot Crate DX review, it looks like it comes with a great value and variety of products.

Part of what makes Loot Crate some of the best subscription boxes is that they have a different theme each month and each product inside is tailored to this theme. For example, “Guardians” was a theme in May 2017, and they sent out different products from Guardians of the Galaxy, Wonder Woman, Marvel, and other superhero-themed movies or shows. I really wanted to get the Harry Potter box since it’s one of my favorite movie series, but I didn’t want to spend $40 on something I’m not sure of yet. So, when looking at Loot Crate reviews, Harry Potter crates were often the focus of my research. From what I saw, they looked awesome. So, if I have a good experience with my first box I’ll probably get the Wizarding World crate next.

You can pay for your subscription with any major card (Visa, MasterCard, Amex, Discover, JCB, Diners, etc). However, they’re not able to accept prepaid gift cards. When it comes to a Loot Crate Coupon, I was able to find a few different coupons with a quick search on Google. I found a coupon for 10% off any order, 15% off new subscriptions, and various other coupons for their store. They allow one coupon per subscription and coupons cannot be used on upgrades. I wasn’t really able to find any coupons on their actual website.

My May box arrived in a timely matter after I placed my order. It was shipped in a simple black box with white Loot Crate lettering around it. My products were set neatly beneath a sheet with details about the theme and products in my box. The theme for this month was role models! However, it was more of a parody of role models because the characters in the TV shows and movies they featured have questionable character traits. 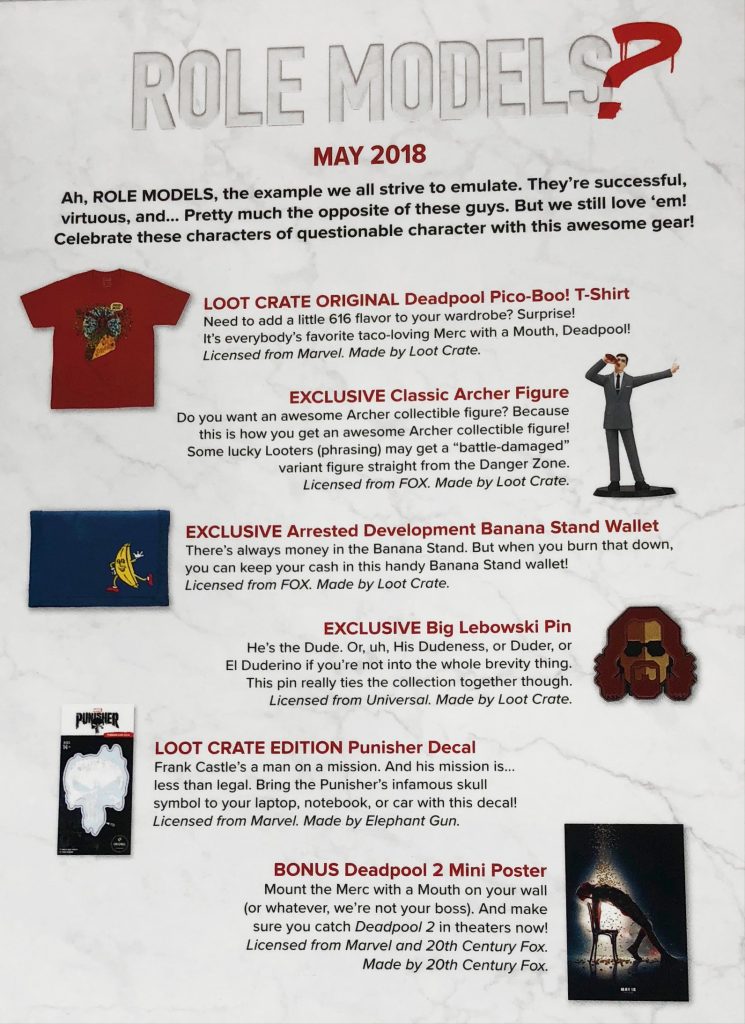 In total, I got five items in my first box. 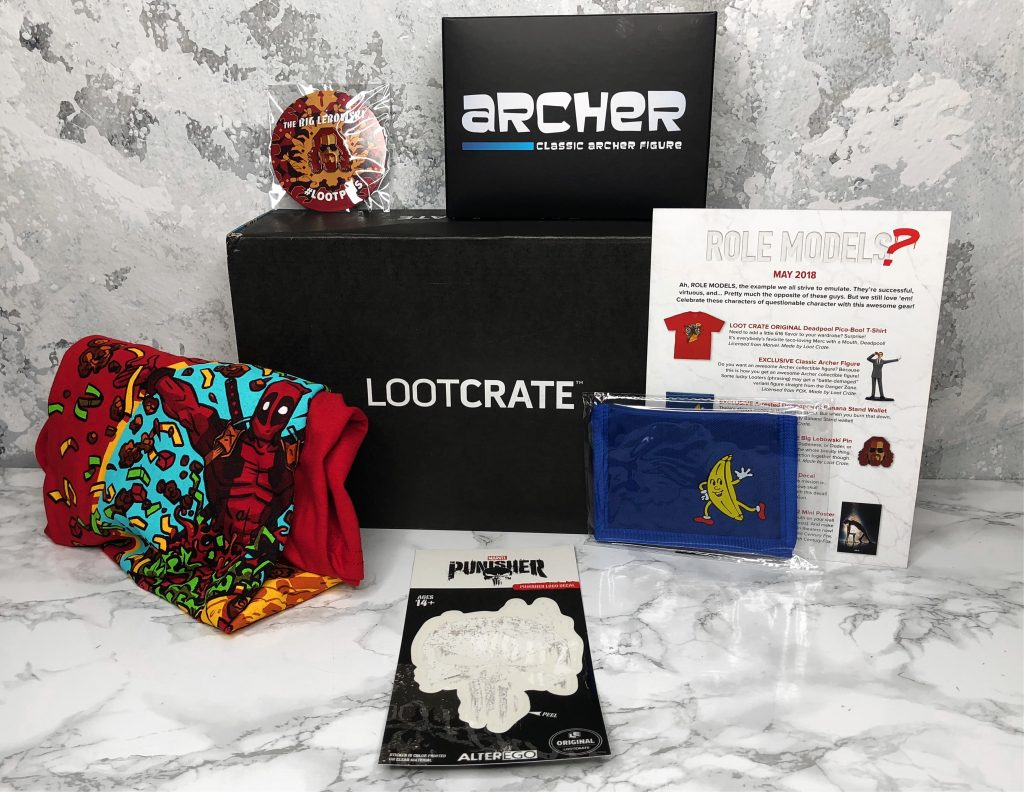 I’ll be sharing each in further detail below. 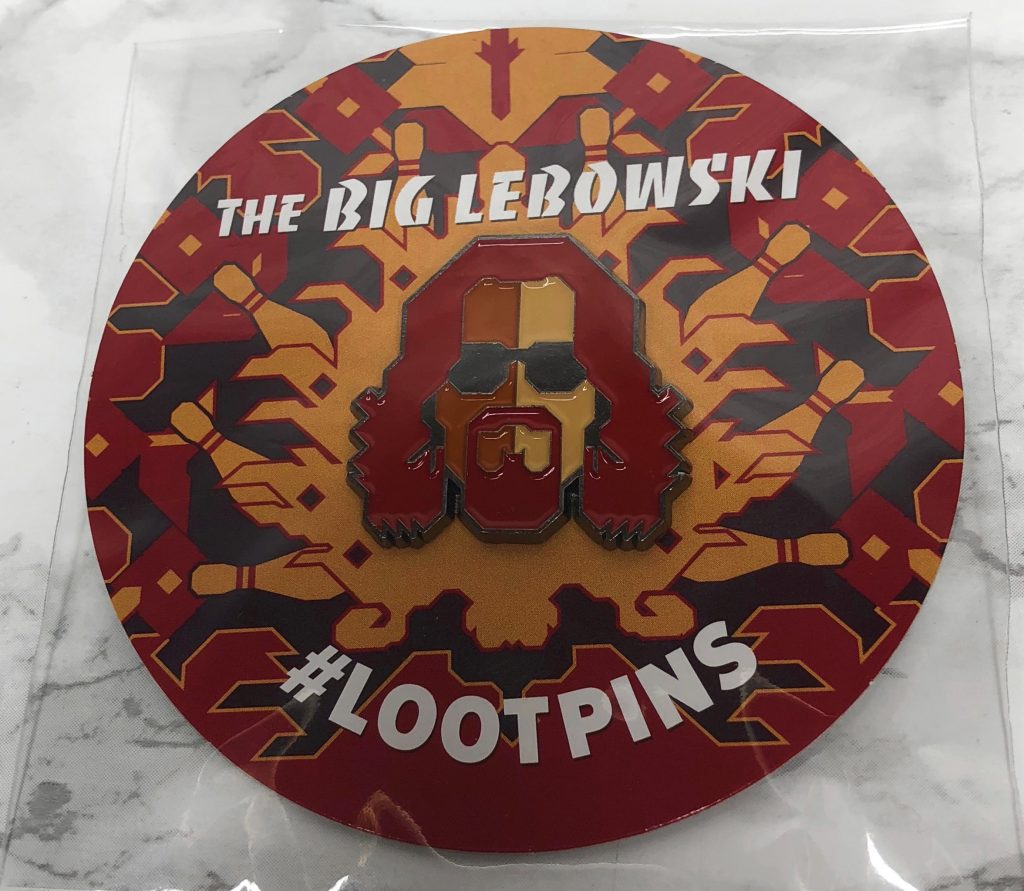 I’ve noticed in other Loot Crate reviews that nearly every monthly box comes with an exclusive pin. This is an exciting way to build a collection of special, exclusive pins that the majority of people don’t have! This month’s pin was themed around The Big Lebowski, which is a movie.

This Arrested Development wallet is adorable. This is actually one of my favorite TV shows! The wallet is a dark blue color with a cute banana patch embroidered onto the front that represents the banana stand in the show. 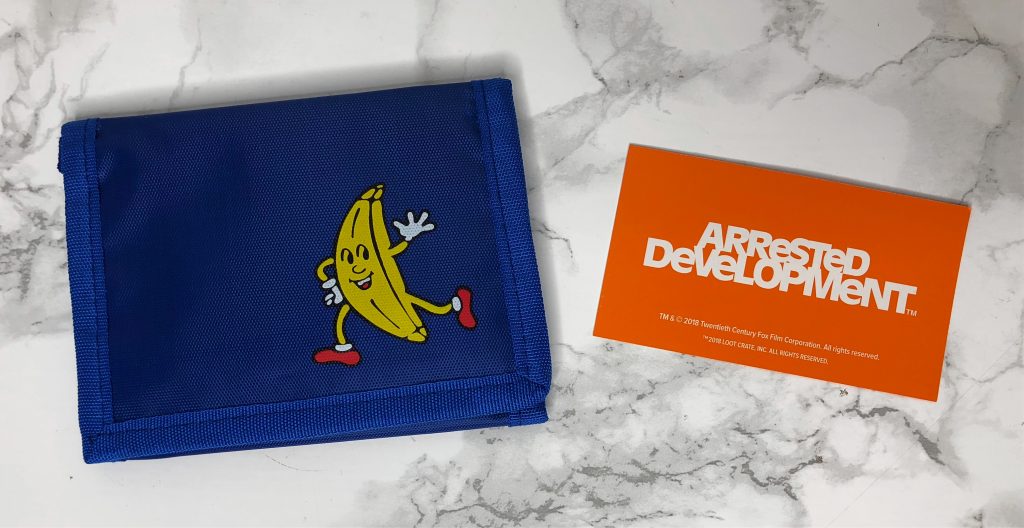 The card it came with has the “there’s always money in the banana stand” slogan, which explains the banana design. It folds out to hold any cash and cards you’d need. 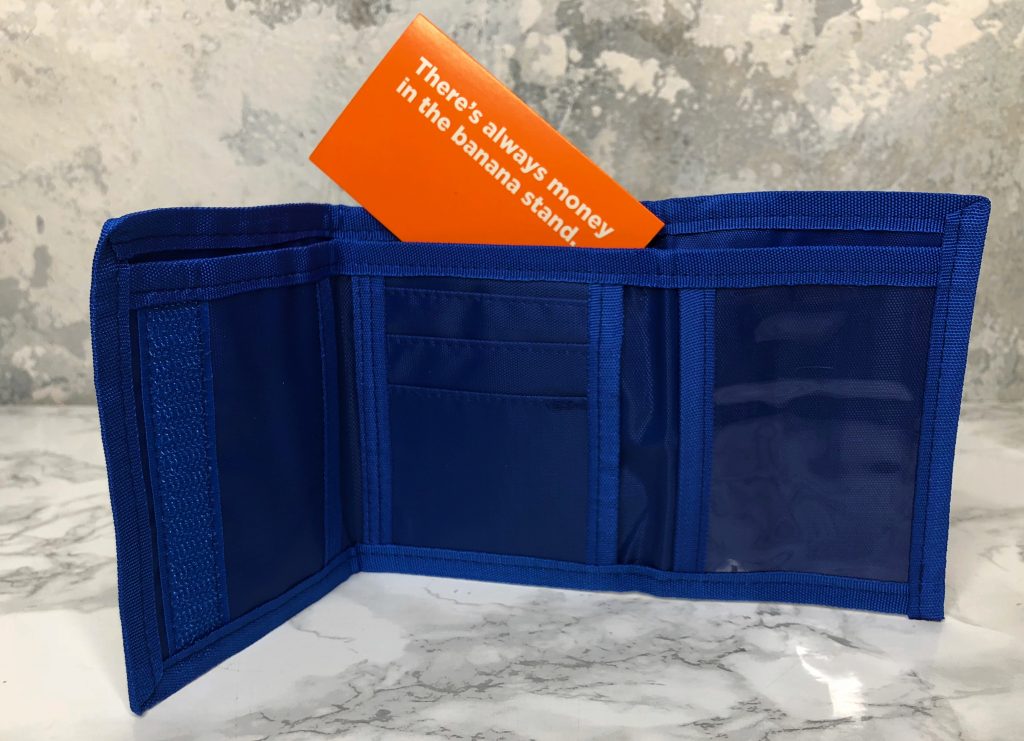 This figure isn’t a kids toy like you might think – it’s a figure for adults! You can see for yourself in any Loot Crate review online. The package states it’s for ages 17+. Typically, people collect these and keep them inside the box. In this one, Archer is “battle-damaged” with some cuts on his face and is holding out a finger as he drinks out of a bottle. 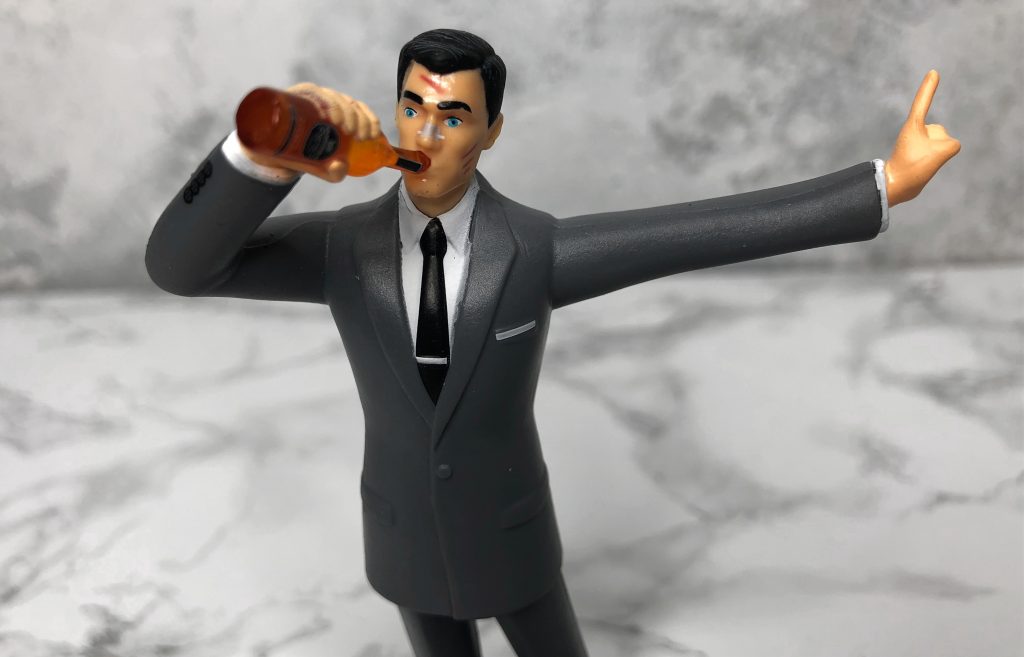 This figure is another item that is exclusive to Loot Crate, which means not many people have it.

Next up in this Loot Crate review is an interesting clothing item! This red shirt has a colorful image of Deadpool jumping out of a taco yelling “Pico-Boo!’ While I wouldn’t say it’s funny like they intended, it’s still pretty cute. 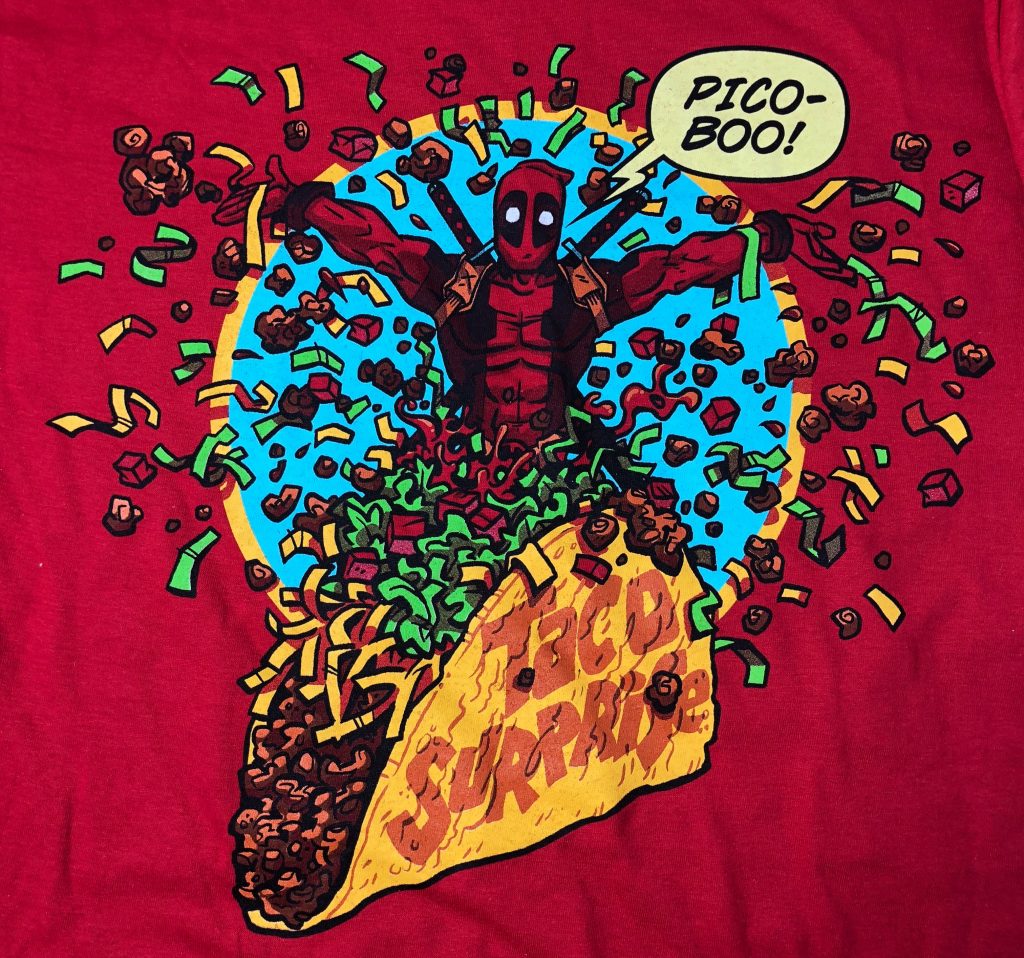 I’m not much of a Deadpool fan but I still enjoyed this shirt. The size was a bit baggy on me. However, I prefer baggy T-shirts, so that works out great! 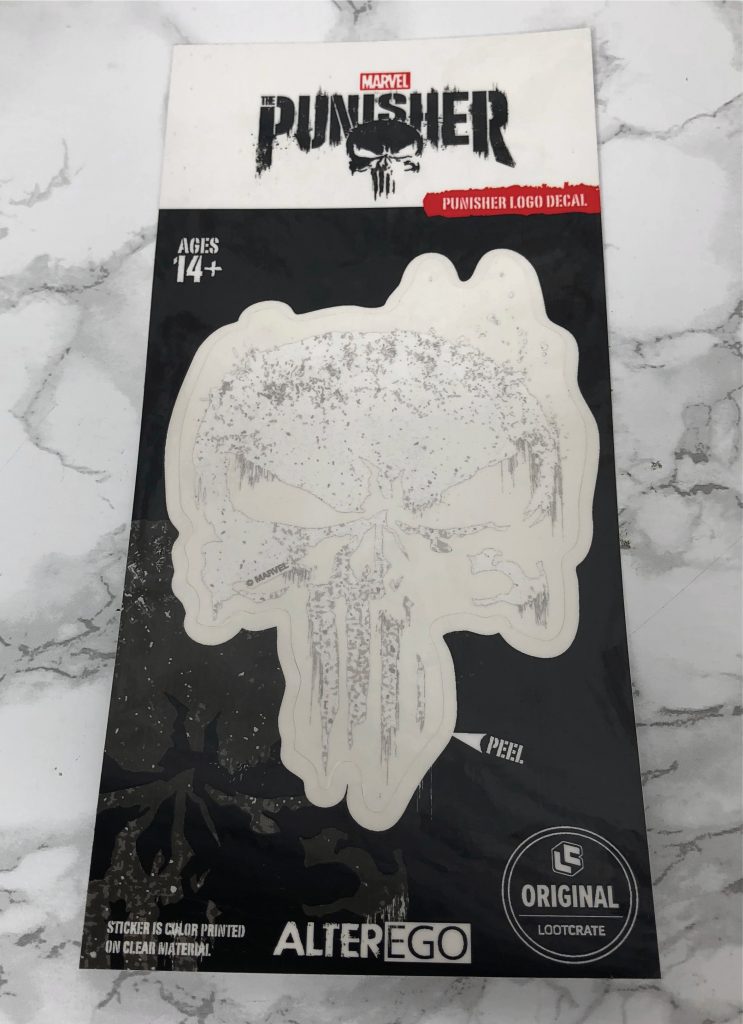 This skull Punisher decal can be stuck on a laptop, car, or anywhere else you’d like to put it. It’s based on a TV series that I haven’t watched yet. Because of this, I gave it to a friend who watches the show and he loved it! As you can see, my friends also have significant benefits from my monthly subscription boxes.

In addition to these five items, they provided a Deadpool poster advertising the movie in theaters. This wasn’t too special – it was just one of those magazine posters they hand out for free. I think this box would be a great option for people who are a fan of a large variety of movies, TV shows, and video games. If not, I would pick a more particular Loot Crate with a theme or products that are already set (such as Harry Potter themed). I loved how most of the items I got are exclusive to this subscription box!

Most popular this month

The 25+ Top Subscription Boxes for Men

ScentBox Reviews [Must Read Before Signing Up in 2022]

The Only ThredUp Rescue Box Review You’ll Need in 2022

Try ThredUp
Is Loot Crate worth it?
To sum up, I had a positive experience ordering my first box and had fun unboxing it. I’d show the items that I got and what my thoughts were – whether they have quality products, whether it is a good value, and so on. From what I’ve noticed so far, Loot Crate would make a great gift for any gamers or geeks you know. With all of the different crate selections you could see in this Loot Crate review, there’s an option for everybody!
Pros
Cons
8.7 Total Score
Shipping
7.8
Product Quality
8.5
Box Value
7.8
Box Choices + Variety
10
User Rating: 3.13 (8 votes)