Home » Reviews » GameFly Review — Is the Service Worth It in 2022?
Reviews

GameFly is a strong contender in the gaming community, particularly for people who have been gaming before the advent of Steam. The company is among the most reputable and reliable subscription-based gaming and video rental sites that offer you the best bang for your buck.

In this GameFly review, we’ll find out what the hype is about. Let’s get started.

GameFly is among the most popular video game rental companies and competes with big names like PlayStation and GamePass. It also ranks among the best value subscription boxes for games and movies. The service has been in business for almost two decades and has a sound reputation with over 400K+ subscribers.

Let’s find out more about the company.

GameFly is a service that sends you physical copies of video games and movies. The company was established in 2002 and works on a subscription-based model. It offers a hand-picked collection for movie lovers and gamers with thousands of titles to pick from, including new and used video games for Xbox series, PlayStation, Nintendo, GameBoy, and older consoles.

GameFly has a huge library with the most popular new releases as well as old nostalgic video games, DVDs, and Blu-Ray rentals.

To borrow a game, subscribers select the title via the GameFly website and get it mailed to their address within five business days via First-Class Mail. That said, more than one GameFly service review mentions delivery sometimes takes longer than that.

Once the video game or movie arrives at your home, you can keep it as long as you want and return it free of charge via the prepaid mailers.

What Does GameFly Offer?

GameFly offers a wide variety of features to its subscribers. Let’s take a closer look: 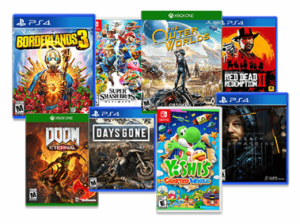 The service has a huge collection of video games for gaming consoles and handhelds. It’s a big edge over other video game streaming or renting platforms since it’s the only place where you can check out and try newly-released games before buying them.

Keep in mind, though, that there’s a higher demand for the latest titles, so it may not be very easy to get your hands on them through the platform. You’ll find the latest releases in the list, but they may have a “low availability” tag. But you can still get them by adding them to your queue and hoping another subscriber returns the game to the service so that you can try it.

GameFly recommends you add at least 10 titles to the queue in order of priority. This way, the service will know which titles to send first.

Another benefit of subscribing to GameFly plans is that they also allow you to rent out movies. If you opt for a Games + Movies plan, you can access a huge number of titles. The service offers movies in DVD, Blu-Ray and 4K UHD formats.

GameFly covers a wide array of genres, including Animation, Action-Adventure, Comedy, Family, Fantasy, and more. Like games, GameFly offers both new and old movie releases. You can say that GameFly is what Netflix was first originally known for. Sadly, it doesn’t offer any merch. If you want to expand your collection of cool game-themed items, check customers’ opinions on Loot Crate.

GameFly also has a mobile app that offers subscribers a quick and convenient way to manage their accounts and queues. Users can edit their queue on the go and get notified about an incoming game delivery. Plus, you can connect with other GameFly users on the platform. 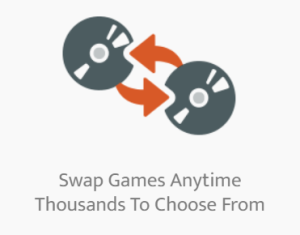 Subscribers can add any game they want to the queue. The minimum number is 10. Again, the most popular game may not be immediately available for delivery, so you may have to wait a few weeks for it. However, the waiting times can go up to months, by which time many users have already bought the game from another source.

This is one of the biggest issues that GameFly hasn’t been able to solve. And that’s why many GameFly reviews agree that the platform is only monetizing on older or less popular games.

GameFly is compatible with a long list of devices, including:

How Does GameFly Work?

GameFly is an excellent service for getting games and movies delivered right at your doorstep. It’s available all across the US and offers thousands of new and classic games.

To start your subscription, visit the GameFly website and log in. You can start a subscription or take advantage of the free trial.

Then, you can check GameFly ratings before adding games and movies to your queue. As soon as you have your queue in motion, the service will send you the next available title. You can keep everything for as long as you want, but you’ll have to return it to get other titles.

If you like the game you rented and want to buy it, GameFly will offer it to you at a discount. The service will also send it to you in its original packaging, along with any manuals or codes that came with it.

Since you can rent out the game for as long as you want, there’s no late fee. You can also cancel anytime you want. If you’ve subscribed to the service, GameFly will bill you once a month.

How Much Is GameFly a Month?

GameFly offers you various pricing plans for renting out video games and movies:

After the introductory phase expires, you’ll be transferred automatically to the new rates:

The platform will upgrade you once you’ve been a member for two months. If you’re eligible, you’ll choose between one of these GameFly plans:

The services cover unlimited rentals along with the 3-monthly $5 rewards. But according to more than one GameFly review, you can get at most 5 to 6 deliveries in a month, considering the time it takes to ship and return the product, plus the time you’ll spend using it. Depending on your plan, you can benefit from up to 24 games or movies in a month.

GameFly also offers a 30-day free trial for new users where you can rent two videos.

During this phase, you won’t have to pay any GameFly subscription costs, but the service requires you to enter valid credit card details in case you want to buy a video game or movie during the trial.

But it doesn’t accept cash payments, checks, money orders, international cards, or PayPal for the membership. 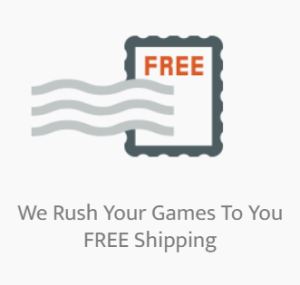 Your game or movie rental will arrive within 2 to 5 days. But according to one gamer’s GameFly review, shipping times can easily exceed that, particularly if you live in a remote state like Alaska. Still, there’s no shipping fee, and the items are delivered via First-Class Mail.

The service will send your order with a return package that includes all the costs. So, all you need to do is to drop your discs in the package and mail them out.

Keep in mind that even if you can keep them as long as possible, if your membership expires during that time, you’ll be charged the entire game retail price.

Customer Service
If you have any questions or concerns, you can contact GameFly through phone or email:

GameFly is among the most popular video game rental services in the US. But it’s not without drawbacks. Many GameFly reviews mention that the average delivery time was longer than the stated 2 to 5 days. Hence, they only got around three video games or movies a month.

Also, most customers complain about the customer support quality. Some also say that popular titles are often unavailable, and it can take several months to get your hands on one.

GameFly ratings are an A- at Better Business Bureau (though it’s not accredited by the agency) and 4 stars on Consumer Affairs.

GameFlyAlternatives — How Does It Compare?

GameFly has an edge in the industry since services that rent out video games are incredibly limited. Some of its alternatives are:

GameStop is different from GameFly since it’s not a rental service. Instead, it takes trade-in games and sells them to users at a lower price. Also, it sells trade-in gaming consoles, smartphones, and tablets.

GameStop offers an interesting feature — if you want to return a pre-owned video game after using it, you can do so within seven days of the purchase and get a full refund. This condition doesn’t apply to new games since they have to be unopened and in the original packaging unless they have a manufacturing defect. There’s a 30-day window to return such games.

You may have heard of Game Pass as the absurdly amazing gaming subscription service that allows you to play a huge range of games at a low monthly price. It’s an excellent option if you don’t want to get physical discs delivered to your home and want to save money playing games by Microsoft and ZeniMax. It also helps you discover new games and stream to Android mobile devices, laptops, and desktops.

But if you’re part of a large family, the gaming costs can be high. Plus, the Xbox Cloud Gaming isn’t very easy to use or ergonomic. And if you’re looking for more alternatives, check our Humble Bundle breakdown.

GameFly vs PS Plus 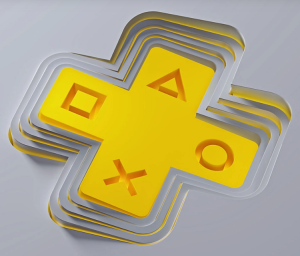 PlayStation Plus offers you to download or stream video games with a monthly subscription plan. That’s an excellent option if you want to save space on your hard drive. The service has plenty of games and a reasonably priced subscription.

GameFly falls among the popular subscription boxes for men in 2022, especially for those who like to collect physical video game discs. It’s a good cost-competitive service, especially if you have time to play at least three games a month. You can also try older and classic games or find some hidden gems.

GameFly gives you a $5 reward every three months, making its subscription fees even more attractive.

All in all, our GameFly review shows that affordability is the main reason you should give this service a chance. With top games coming at an average price of $40, GameFly is the cheapest way you can try them out — that is, if you don’t mind waiting a few weeks. Also, there are no late fees or cancellation fees.

What happens if you lose a game or movie from GameFly?

If you lose a game once, the service won’t make a big fuss over it and may send you another, depending on the availability. But don’t turn this into a habit, or you’ll risk getting your account suspended forever.

What happens if you don’t like a GameFly game?

If you rent out a game you don’t like, you can send it back immediately. The return will take 1–2 days. As soon as GameFly has it back in its inventory, it’ll ship you the next game in your queue.

Can you buy GameFly games?

Yes, you can buy certain video games and movies. These items will have a “Keep” option in your queue to purchase them. You can click on the button and pay a discounted rate to own the game or video.

Yes, GameFly is a completely legitimate service. The company is owned by the same group that owns Alliance Entertainment, but it acts as an independent service.

Is GameFly Worth It?

Although it has its share of complaints, more than one GameFly review agrees it’s the most popular, reliable, and reputable video game rental service on the market.